I'm building a 3 meter by 1.6 meter (9 foot by 5 foot) HO scale model railroad with a river through the middle of it, and I want to use real water in the river.

I'm curious to hear from the engineers at Miniatur Wunderland what recommendations they have based on their use of water in the Scandinavia exhibit, and especially what they used to waterproof and then decorate the harbor-bed.

The local hardware store paint guy recommended marine paint (usually used on boats). I've seen a commercial for a spray-on waterproofing thing (looks like liquid tar, but they claim it's paintable. They were demonstrating it on rain gutters and flower pots). And I've been wondering if rubber cement dries waterproof (no idea if it even does, but figured I'd coat something with it, and then cover it with sand, if that's a viable option).

The area I have for my river is about 9 inches wide, five feet long, and two inches deep. I expect to narrow the river to two or three inches, once the riverbed is built.

And even after recommendations, I'm curious to know how the Scandinavia exhibit was built.

You guys shoulda done a "Taggebuch" for that, too. 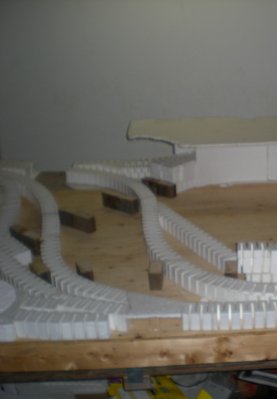 A much older (and slightly fuzzy) picture of the riverbed without any tracks. 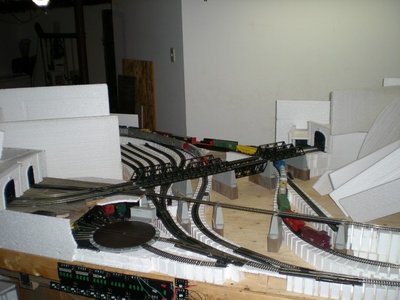 Probably the clearest photo I've got of the riverbed. It's a couple years old, but it gives you some idea of what I'm working with.

Hello, Skymaster, (I guess you wear a more common name as well?

Welcome to the Forum first.

I cannot speak for the builders of the Scandinavia part in the Wunderland.
But as far as I can judge genuine water on a home layout is not recommendable.

1) It takes a lot of skill, material and work to make the river bed really waterproof.
2) The combination of water and electricity is unhealthy in case of leakage.
3) Real water will always worsen the room climate. Iron things will tend to rust much more.
4) Its never worth the effort. If you use 1:1-water in a 1:87-world, it won't look real.
The surface will never frizz fine enough. Waves just never have the correct scale.

So my advice, especially as long as there are no ships scheduled to move on the surface: Try to build the river with "model water", that will look very much more real and will cause you less trouble.

That's the naked truth! Think about it.

You can have a look at the construction of the Scandinavian water area in several "Wochenbericht" of the year 2004 -
look a little before and after the "Wochenbericht" no. 206 - 211. Very interesting pictures!
And please remember and pay attention, how much weight real water has ...

I expect stagnant water might also start to smell after a while.

I once read that a convincing water effect can be created by painting the back of some rippled glass? I wouldn't recommend using glass if children will be using the layout.
Nach oben

if you are insecure about real glas (it's far less fragile than one would imagine) why don't you use acrylic glass? Easier to deal with, even less fragile.

But I have seen layouts with "water surface" completely without glas/plexi/acrylics or that stuff: The surface of the sea was sealed with woodchip wallpaper, then lacquered in blue/green shades (glossy finish). Add some foamy tips with white wallpaint. Amazing!

Most builders do not pay attention to the fact, that water in (real) rivers, ponds, creeks, sea, harbours is NOT transparent! You can NOT look to the ground unless it's really crystal-clear and absolutely calm, even less if you view from a position several hundred feet above ground level.

So one can build a river-bed rather shallow, paint it in shades of blue/green, add a sprinkle of brown, cover the whole thing with rippled glas or acrylics or even film, and there you are!

My interest in real water wasn't so much realism as just for the fun of it.

(I'm more in this for the engineering than for the modeling. I'm hoping to get some friends to do the painting and decorating for me, or with me, or something).

My intent was for there to be a small pump that would pour water in underneath the foam bridge section at the foreground of the pictures I posted, and for that water to drain towards the background, and fall over the edge of the layout into a bucket, from which it would circulate back to the pump.

The environment is my basement, which houses the hot water heater and the water softener, the latter of which drains into a floor drain in the middle of the basement. Ie: The river won't add any humidity to the room. The sole concern is leakage through the riverbed, and I'd mostly focused on preventing it, not considering the ramifications of failure on that point... It would be possible for me to route most of the wiring away from the river, though not all, and I have a large yard hanging underneath the main layout which would probably get dripped on. (Connected to the main layout via an 8% and 12% access ramp on the side.

I suppose it would be possible to lay something that is designed to be permanently waterproof under the riverbed, like Tyvec, or PVC, to protect the plywood and foam, and to catch any leaks and drain them towards the bucket... then I'd build the river inside that shell. I'd still want something that would theoretically waterproof the river, though, or some way of making the riverbed look realistic. I mean, I suppose I could impregnate a whole bunch of sand with superglue, but that sounds expensive, complex, and almost guaranteed to go wrong. Don't know the solubility of rubber cement... I'm also hesitant to trust "waterproof" paint on plaster. (Some day I may very well want to put in fake water, once I've gotten tired of playing with the real stuff, but for now, I mostly want to see if real water CAN be done, and I just like playing with water

And simply for curiosity's sake, I'm curious to know how the Scandinavian seafloor was constructed. (If there's any way to ask the folks who built it, since you don't know, yourself...)

I'm a Mechanical Engineer with a fascination with fluids.

That's the reason for my insanity.
Nach oben

C337Skymaster hat geschrieben:I'm curious to know how the Scandinavian seafloor was constructed.

Have a look at this address --> click me <-- to see photos from the construction. There you can see many details
(the text is in German language).

Google Translate can take care of the captions (not perfect, but good enough to get the gist).

And from that I can see that they used fiberglass and resin. I can probably get ahold of some of that from my uncle, but it looks like pretty toxic stuff to work with. Not sure if I should be releasing those fumes into our basement...

Well, this is where prototyping and trial-and-error come into play.

I'll build a number of small river segments that are separate from my trains, and see what works.